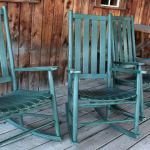 It is so easy to miss opportunities to witness. Let’s listen in on a conversation between Joey and Hank.

It is a hot muggy July afternoon and two Christians sit dejectedly on their porch bemoaning all the problems in the world.

As they look out from the comfort of their rocking chairs they witness two men cursing loudly and swaggering from too much drink.

Joey: “What is this world coming to? Hank, you know what would fix all this, is a good old fashioned revival.”

Hank: “You know Joey, I think your right”

Joey: “Yeah, just imagine Billy Graham or some other big name preacher going from city to city winning tens of thousands of souls to Christ.”

Hank: ” That would be great! You know they could simultaneously broadcast these revivals on TV, radio, and even over the Internet.”

Joey: “Whoa! That would be big. Probably reach millions of souls for Christ all at the same time.”

Hank: “Man, what a different world it would be with all those people converting to Christianity.”

Joey: “Sure would, let’s pray about it.”

Hank: “OK. ‘Dear Lord, we pray for a mighty revival, so that millions of people will know about your Son and His saving message. Amen.'”

It is a hot muggy August afternoon and two Christians sit dejectedly on their porch bemoaning all the problems in the world. As they look out from the comfort of their rocking chairs they witness two men cursing loudly and swaggering from too much drink

Joey: “You know what this world needs is an old fashioned revival . . .”

This is the attitude portrayed by the majority of Christians. They sit back idly watching the world, complaining about its problems, and dreaming about a revival that will reach the lost; hopefully in one fell swoop.

Is this what the bible teaches? Is this how we are suppose to be good stewards of God’s word? Every minute and every day that Christians squander waiting for someone else to do the evangelizing is a misuse of the valuable resource of the members of the body of Christ.

Power of the Believer

Do you know how many Christians there are in the world? I don’t but let’s take a very conservative figure and say there are 10 million Christians in the world. If each of these believers just reached three people a year with the gospel, the amount of people reached would outshine any revival by a long shot. By reaching three people a year that would be 30 million new believers and the growth would be exponential after that because each year there would be more Christian soldiers proclaiming the truth.

Sadly, the body of Christ is not experiencing this exponential growth because like Hank and Joey in the above story, most Christians sit back waiting for someone else to do it or for a magical revival to take place.

Are you missing opportunities to witness? I encourage you to get out of your chairs and get into the trenches and minster to the lost with God’s word. How many people are missing out on God’s word because you keep silent?