You are here: Home / Salvation / The Conversion of the Philippian Jailor 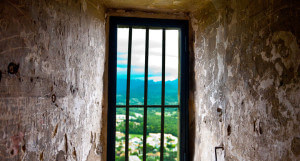 “And at midnight Paul and Silas prayed, and sang praises unto God: and the prisoners heard them.

” And suddenly there was a great earthquake, so that the foundations of the prison were shaken: and immediately all the doors were opened, and every one’s bands were loosed.

” And the keeper of the prison awaking out of his sleep, and seeing the prison doors open, he drew his sword, and would have killed himself, supposing that the prisoners had been fled.

” But Paul cried with a loud voice, saying, Do thyself no harm: for we are all here.

” Then he called for a light, and sprang in, and came trembling, and fell down before Paul and Silas,

” And brought them out, and said, Sirs, what must I do to be saved?

” And they said, Believe on the Lord Jesus Christ, and thou shalt be saved, and thy house.

What are these sounds at midnight? Praying! Singing!

Strange! Can it be coming from the dungeon where the two latest prisoners were cast? They cannot even kneel; their feet are fast in stocks. And sing? Why, only a few hours ago they were brutally beaten with rods and thrown into the dungeon, their backs pitifully bruised and bleeding from “many stripes.”

Of course, they cannot sleep-but how can they be praying and singing under such circumstances and in such a place? Yet it must be they we hear, for they are the ones who have been going about telling people about salvation through Christ.

How strange and wonderful it sounds! Until now these walls have heard only groans, curses and vile outbursts: now they are hearing prayers and songs!

What a testimony Paul and Silas bore for Christ that midnight! Though deeply wronged and in physical misery, faith and joy overflowed as they prayed and sang hymns (Gr. humneo) to God. They were far from bitter. In their suffering, and not knowing how long they would be confined to this horrible dungeon or what test they might have to face next, they poured out their hearts in prayer to God, calling upon Him for strength and help.

And somehow He seemed closer to them now, rather than farther away, so that they burst out in one song of praise after another, coming from hearts overflowing with peace and joy. “And the prisoners were listening.”[“The prisoners heard them” is not strong enough. They listened, deeply impressed by what they heard.]

Their consciences were clear and their hearts right with God-and more, like the apostles in Jerusalem in their persecutions, they rejoiced “that they were counted worthy to suffer shame for His name” (Acts 5:41). Indeed, in a truer sense than they, Paul was the apostle of the rejected Christ, filling up that which still remained of His afflictions for His Body’s sake (Col. 1:24). Thus he later wrote to the saints in this very city:

” For unto you it is given in the behalf of Christ, not only to believe on Him, but also to suffer for His sake;

Yes, and the apostle went farther than that, expressing to them his longing to know Christ more intimately in “the fellowship of His sufferings” (Phil. 3:10).

This was the joy that filled and overflowed the hearts of Paul and Silas in that dark prison cell.

And suddenly, as they prayed and sang, there was an earthquake, so violent that it shook the foundations of the prison. “And immediately all the doors were opened, and every one’s bands were loosed” Acts 16:26).

Surely this was a divine intervention. What if history does bear witness that earthquakes were frequent in that vicinity at that time, it would still be a miracle that one should take place just then and do just that-including even the loosing of every one’s bands! This last unquestionably bears the stamp of the miraculous. Those who deny this have argued that an earthquake, besides loosening the doors, might well have broken loose the bolts that fastened the prisoners’ chains to the walls. But what of the other ends? It says “every one’s bands were loosed,” not merely loosed from the walls. Moreover Paul and Silas had had their feet fast in stocks!

And now the jailor awakens to find all the doors of the prison open and naturally supposes that the prisoners have fled. It is well-known how these Roman keepers were made responsible with their lives for the prisoners entrusted to them (see 12:19), hence it is not strange to find the Philippian jailor, in his distress, drawing his sword to take his life. Suicide, he thinks, is better than disgrace and a cruel execution.

But somehow Paul found out or sensed that the jailor was about to take his life and cried aloud from the darkness: “Do thyself no harm: for we are all here” (Acts 16:28). To the jailor this must have seemed amazingly humane after the rough treatment he had given Paul and Silas, yet it was one of the natural fruits of the gospel they had been proclaiming.

But what power had kept all the prisoners in their cells? We are distinctly told that “all the doors were opened–” and “every one’s bands were loosed” (Acts 16:26). Why did no one flee? We believe it was what they heard as Paul and Silas prayed and sang hymns, for what must have been the reaction in the heathen heart and mind to such conduct! How could they help associating the earthquake with it?

By now the jailor, so narrowly saved from committing suicide, was completely overwhelmed. Calling for lights (plural, probably torches) he “sprang in” and “came trembling” and “fell down” before Paul and Silas. So great was his reverence for them now that he did not even speak until he had “brought them out” of the dungeon. Then he asked the great question which may already have been troubling him and now had suddenly taken possession of his heart and mind. Addressing them as “Sirs” (Gr., Curiol, Lords) he entreats: “What must I do to be saved?” (Acts 16:30).

WHAT DID THE JAILOR MEAN?

It has been argued by some that the jailor had physical deliverance rather than the salvation of his soul in mind when he asked this question, but the evidence unites to prove that this is not so.

1. Paul and Silas had been pointed out for “many days” in Philippi as men who proclaimed “the way of salvation” (Ver. 17,18).

2. The earthquake was over. He could hardly be seeking “salvation” from that.

3. None of the prisoners had escaped, so his life need no longer be in danger from that source. Indeed, the jailor seems to have taken no immediate steps to resecure the prisoners, either because his attendants (Ver. 29) saw to this, or because the salvation of his soul was now his supreme concern. God may also have used the circumstances to cause the prisoners to stay. At any rate, had he feared Roman judgment now, his first concern would have been to make certain no prisoner would escape.

4. The earthquake, the open prison doors, the neglect of the prisoners to do that which would have insured his ruin, Paul’s solicitude for his life when he was about to commit suicide; all this would tend to make him seek more than physical deliverance.

5. Paul and Silas evidently took the jailor to mean that he sought salvation from sin. They would not have promised physical deliverance in return for faith in Christ.

6. The tender solicitude of the converted jailor toward the men he had so abused, and his joy when he “with all his house,” did believe, would seem to indicate that he had been under conviction of sin.

7. The references to the jailor’s “house” in connection with both Paul’s reply and the jailor’s conversion (Vers. 31,32,33,34) harmonize with the cases of Cornelius (11:14) and Lydia (16:15) where salvation from sin was certainly in question.

How ready the apostles were with just the answer the jailor needed! “Believe on the Lord Jesus Christ, and thou shalt be saved” (Acts 16:31). This is the core of the message of grace.

The added words: “and thy house,” have sometimes been taken as a promise that the faith of one member of the family secures the salvation of the whole family. If this were so all the world would of course be saved, for we are all related, but the apostle did not mean this, nor is this teaching found anywhere in the Pauline epistles. The meaning is simply: “This goes for your household too. They, as well as you, may believe and be saved.”

But while the apostles came right to the point in answer to the jailor’s inquiry, they did not stop there, as some evangelists and soul-winners do today. Still sick and sore, they preached “the Word of the Lord” to the jailor and to the members of his household, who had by now gathered round (Acts 16:32).

Soon enough the jailor showed evidence that he had sincerely trusted Christ as his Savior, for “the same hour of the night” he took them to still another place, where water was available, and there the once brutal jailor tenderly washed their stripes. We are not told what he said when he did this, but we suspect there were many words of regret and apology.

Reprinted from the Berean Searchlight, the official organ of the Berean Bible Society, Volume LVI Number 5