You are here: Home / Bible Reflections / Free From Sin, Free to Serve God 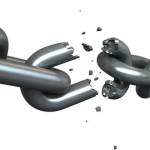 The chains of death have been broken and we are now free from sin.

Romans 6:22 But now having been set free from sin, and having become slaves of God, you have your fruit to holiness, and the end, everlasting life.

As we continue to look at the “but nows” of Paul, we will continue to see the riches we gained at the cross of Calvary. These riches were kept hidden until they were revealed directly to the Apostle Paul by Jesus Christ.

In Romans 6:22, again Paul is using the “But Now” to alert us to a change contrasting the difference between law and grace. Previously we were a slave to sin which resulted in death but now we are a slave to God resulting in eternal life. Since we no longer serve sin, we are free to serve God. We have been delivered from the power of sin and now belong to God.

—Romans 6:18 NKJV “And having been set free from sin, you became slaves of righteousness.”

God performed the act of freeing us from sin and rooting us in Him, bearing His fruit which results in eternal life. God here comforts the believer letting  them know in no uncertain terms that we now belong to God. Being freed from sin has given us life in Christ.

—Romans 8:2 NKJV “For the law of the Spirit of life in Christ Jesus has made me free from the law of sin and death.”

The Gift of Eternal Life

Before we could not bear good fruit. Nothing we did could earn us a place with God. It is delightful to see what a great treasure Paul signals here with his “but now”. We have received a great gift; the gift of eternal life. This allows us now to be tools for the cause of God.

If you have not yet accepted Christ as your savior and trusted in His finished work on the cross, won’t you do so now and receive the gift of eternal life.

Rom. 6:20-23  For when you were slaves of sin, you were free in regard to righteousness. What fruit did you have then in the things of which you are now ashamed?

For the end of those things is death. But now having been set free from sin, and having become slaves of God, you have your fruit to holiness, and the end, everlasting life. For the wages of sin is death, but the gift of God is eternal life in Christ Jesus our Lord.