You are here: Home / Salvation / Christ Conquers Death! We are Made Alive in Christ. 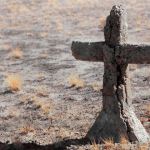 Believers can draw courage from the fact that through the ordeal on the cross — Christ Conquers death. The act of Christ rising from the dead dealt defeat to death. He atoned for our sins while taking away the power sin held on our eternal existence. Instead of death we have been redeemed.

—1 Corinthians 15:55–57 NKJV “O Death, where is your sting? O Hades, where is your victory?” The sting of death is sin, and the strength of sin is the law. But thanks be to God, who gives us the victory through our Lord Jesus Christ.”

Made Alive in Christ

—2 Timothy 1:10 NKJV “but has now been revealed by the appearing of our Savior Jesus Christ, who has abolished death and brought life and immortality to light through the gospel,”

In this “but now” of Paul’s, we learn that Christ’s work on the cross put the final nail in the coffin for death. The glorious truth that Christ conquers death and what He accomplished at Calvary is being illuminated by the gospel given to Paul by Christ. We have now been made alive in Christ and are no longer slaves to sin.

Our freedom from sin is at hand. Through Christ’s finished work at Calvary, He is officially represented as our Savior. We are saved by His work on the cross in our behalf.

Christ’s accomplishments on the cross is one of the greatest events in history. For those who placed their faith in Him were changed from a dead creature into a living creature. It is truly good news to learn that Christ conquers death.

—Ephesians 2:1 NKJV “And you He made alive, who were dead in trespasses and sins,”

—Ephesians 2:5 NKJV “even when we were dead in trespasses, made us alive together with Christ (by grace you have been saved),”

Romans 5:21 so that as sin reigned in death, even so grace might reign through righteousness to eternal life through Jesus Christ our Lord.

Up until this time we were under the sentence of death, helpless to avoid its consequences. Death was a direct result of sin. But now Christ has conquered death by His death and resurrection. The outcome of this is eternal life.

Christ’s crucifixion was the only solution to death’s grip on us and Calvary is God’s greatest achievement. The only person capable of accomplishing this was Christ. Without His death, burial and resurrection, mankind would never be able to escape the yoke of death.

Thankfully, before the foundation of the world, God in His wisdom had a divine plan to save us, which he had kept hidden but now He is making it known. This knowledge that was kept hidden is being revealed directly to the Apostle Paul by Jesus Christ.

He is making this known through the light of the good news (gospel) that he revealed to the Apostle Paul, that we are saved by God’s grace (His unmerited favor). It has nothing to do with our works but solely on God’s.

Ephesians 2:8 For by grace you have been saved through faith, and that not of yourselves; it is the gift of God, not of works, lest anyone should boast.

Even though, we may not escape physical death, Christ’s death, burial and resurrection is our guarantee that death will be destroyed and has no power over us. (1Corinthians 15:20-28) We are ensured eternal life through Christ, so we do not need to fear death.

Christ conquers death so that you may have eternal life. Trust in Christ’s finished work and trust that Christ died on the cross for your sins, He was buried and rose again. Do this and you too can sing “O Death, where is your sting?”

2Timothy 1:8-12 Therefore do not be ashamed of the testimony of our Lord, nor of me His prisoner, but share with me in the sufferings for the gospel according to the power of God, who has saved us and called us with a holy calling, not according to our works, but according to His own purpose and grace which was given to us in Christ Jesus before time began, but has now been revealed by the appearing of our Savior Jesus Christ, who has abolished death and brought life and immortality to light through the gospel, to which I was appointed a preacher, an apostle, and a teacher of the Gentiles. For this reason I also suffer these things; nevertheless I am not ashamed, for I know whom I have believed and am persuaded that He is able to keep what I have committed to Him until that Day.